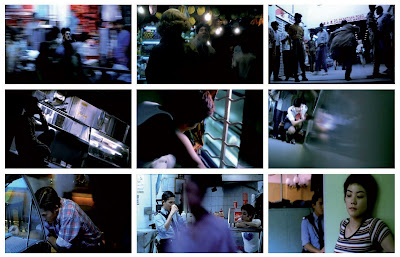 The film tells us two love stories that happen in the Chungking Mansions in Hong Kong.

What interests me in this film is, on the one side the idea of voyerism and search for authentic love and on the other, the way in which the visual language is achieved, using high contrasted and high saturated images and a dream-like quality achieved with the use of a contrast between fast forwarding and slow motion.

The idea of the love story was inspiring in the way that the short film project can be narrated.

In addition the film is mainly shot in the street and it shows a great contrast between the traditional elements of Hong Kong and the modern urban.